A little under a century ago in a small suburb of London, a boy by the name of Christopher Robin was born. As a child he was gifted a stuffed teddy bear, and together the two were the inspiration for the beloved children’s books about Winnie-the -Pooh written by his father A.A. Milne.

Since they first graced the pages of A.A. Milne’s books, Christopher Robin and Winnie-the-Pooh have captured the hearts of children and adults all around the world. And just like any beloved character, the internet is full of creative artwork that mashes up Winnie-the-Pooh with multiple other fandoms. We’ve gathered a few of our favorites to share.

James Hance has re-imagined Christopher Robin and Winnie-the-Pooh as Chrisolo Robin and Wookie-the-Chew, putting a very Star Wars twist on the story. The two friends, along with R2-D2 get into all sorts of adventures and a little bit of trouble. And the best part? You can buy your very own stuffed Wookie-the-Chew from his shop!

Thanks to the brilliancy of Kat Haynes, we get a glimpse at what would happen if the characters from Winnie-the-Pooh got to spend some time with the emotions from Inside Out. And as a bonus, you can purchase shirts with the illustrations on them from TeeFury!

Winnie-the-Pooh and Dr Who

If you’re looking for a special cake for that special someone who loves both Winnie-the-Pooh AND Dr Who, well, look no further. The brilliant cake decorators at Nerdache Cake have transformed Tigger and Piglet into Eleven and his companion in the tastiest way possible!

Do you have a favorite Winnie-the-Pooh mashup? Be sure to share it with us in the comments or on Twitter @QuirkBooks! Blog
Ten Things Winnie the Pooh Taught Me About Life 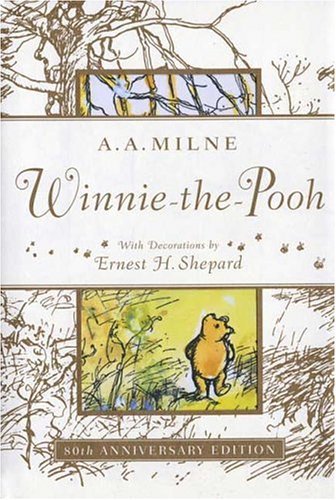 Blog
Books We’re Thankful For: How Winnie the Pooh Changed My Life