Six of Crows duology by Leigh Bardugo for Percy fans

Let’s start with the man of the hour: Taliesin Jaffe’s human gunslinger Percival Fredrickstein von Musel Klossowski de Rolo II (yes, he’s that extra). Each Vox Machina member gets their chance to shine, but Percy’s connection to the main antagonists of season one makes for a fascinating and dark tale. If you enjoy the slow burn revenge plot of a traumatized mastermind, you’ll want to give Leigh Bardugo’s Six of Crows duology a go for an equally complicated and morally gray protagonist in Kaz Brekker. Enjoy slow burn romances and love interests who heal together? There’s your second Percy-adjacent reason to dive into Six of Crows.

Speaking of love interests, Laura Bailey’s half-elven archer, Vex’ahlia is the charismatic, self-dubbed treasurer of the group. Bailey may have summarized her as “hot” in the 2021 NYCC cast panel – which is true – but beneath her looks and confident aura lies feelings of resentment and rejection. Xiala from Rebecca Roanhorse’s Black Sun acts similarly, projecting a self-assured manner to help buffer past rejections and present contempt. She may not have a bear companion like Vex does in Trinket, but Xiala’s connection to Serapio and his crows counts right? And with Fevered Star, book two in Roanhorse’s Beneath Earth & Sky series, releasing in April, now’s a good time to give this one a go.

The Gilded Wolves series by Roshani Chokshi for Vax fans

Do you like 1) snarky rogues, 2) bisexual disasters, or 3) a casual emo aesthetic? Then Vex’s twin brother, Vax’ildan is probably your favorite Vox Mahina member. Created by Liam O’Brien, Vax is a sincere (though sneaky) man with equal parts seriousness and playfulness. If the duality of Vax is appealing to you, try Roshani Choski’s The Gilded Wolves series for a good mix of humor and gritty treasure hunting. There’s similar queer rep, similar emo boys, at least one winged man, some trouble getting into doors and looting treasure, and a whole plot about gaining the power of gods.

One of the spellcasters of Vox Machina and the final half-elf of the group, Marisha Ray’s Keyleth is a reserved druid and future leader of the Air Ashari tribe. Despite wielding powerful magic, Keyleth’s is hesitant and socially inept, leaning her individual journey toward that of gaining the confidence needed to lead and protect her people. In Tom Probert’s Lightfall graphic novels, protagonist Bea studies magic in a secluded forest before her guardian too disappears and sets her on a path of self-discovery and empowerment. Both girls struggle with crippling anxiety and have strong magical powers and items at their disposal, and Probert’s art is soft, earthy, and mystical, giving of major Keyleth vibes. No better time than now to dive in as the second Lightfall book Shadow of the Bird releases this April.

Gnome bard Scanlan Shorthalt is often classified as the comic relief of Vox Machina, and though his creator Sam Riegel explores Scanlan’s deeper insecurities and necessary growth the further you get into campaign one, Scanlan’s hilarious and often crude ditties are memorable aspects of his character. He’s also surprisingly powerful, with spells like Bigby’s Hand and Scanlan’s Magnificent Mansion at his disposal. T. J. Klune’s 18+ Tales from Verania series has a more romance focus, but the quick and raunchy humor of the book is comparable to that of Scanlan Shorthalt. The main character Sam uses his all-powerful magic to turn a man’s nose into a penis, and one of Sam’s best friends is a gay unicorn (without a horn), and that’s something Scanlan could most definitely get behind.

The Apprentice Witch series by James Nicols for Pike fans

Nothing says mom friend like Ashley Johnson’s Pike Trickfoot. The main healer of Vox Machina and gnome cleric of the goddess Sarenrae, Pike’s attention is regularly focused on either healing other group members or helping locals via assisting refugees, building temples, and the like. Arianwyn, from James Nicols’s The Apprentice Witch series, does similar good deeds through her magical work as Lull’s town witch. Though Pike’s does so for religious reasons and Arianwyn for professional ones, both devote their lives to others and ask for little in return. And the sheer patience of these two when surrounded by vast amounts of BS is mind-blowing!

The Witcher series by Andrzej Sapkowski for Grog fans

There are a number of reasons to name Grog Strongjaw your favorite Vox Machina member, whether it be his endearing low intelligence, his friendship with Pike, or the sheer power of his rage in battle. If you’re like his creator, Travis Willingham, and love nothing more than a good dose of high fantasy action (especially cool monsters like werewolves), try Andrzej Sapkowski’s Witcher books. Although Sapkowski’s Geralt and Willingham’s Grog have drastically different personalities and narratives, Willingham created Grog simply to enjoy some high fantasy violence and adventure, and that’s what you’re promised in the pages of the Witcher books.

The League of Ursus series by Robert Repino for Trinket fans

Ok, we couldn’t leave out the eighth (and fuzziest) Vox Machina member, Trinket. Voiced originally by the committed Matthew Mercer, Trinket is Vex’s armored bear companion, who will do whatever it takes to protect his friend. Another warrior bear, armed and ready for battle – no, not Iorek Brynison – is, of course, Spark from Robert Repino’s The League of Ursus series. This stuffed teddy bear fights nighttime monsters and travels through interdimensional portals for the sake of her human Loretta and Loretta’s brother Matthew, like any good bear companion does.

Looking for other book recommendations based on your favorite shows and characters? Check out these previous posts: 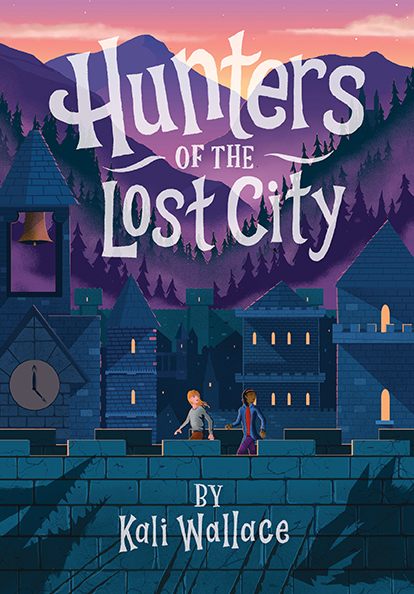 Iron Magicians: The Search for the Magic Crystals