What if The X-Men Was A Gothic Novel 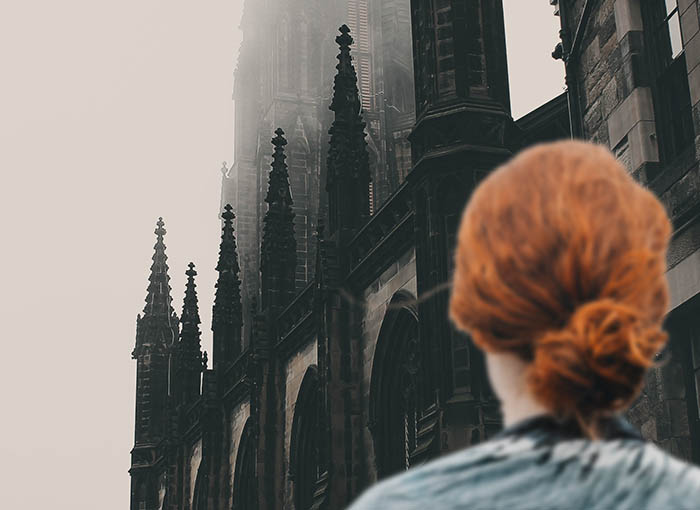 Jean Grey regarded the Xavier estate with a unconscious shiver, as the moon illuminated the mansion’s immense spires that rose out of the Westchester fog like dark swords. Was this a school? And to be her home? The bald man in the wheelchair appeared to sense her thoughts, and beckoned from the doorway. But what of the strange, misshapen creatures behind him? What of they?

“Come, child,” said the bald man. His eyebrows were like the towers of the manse, pointed and vaguely sinister. “I am Charles Xavier. I know of your distress. But you have nothing to fear.”

How could he possibly know? Jean thought, shivering on the doorstep.

“How, indeed?” Xavier’s voice somehow echoed in deep in the recesses of Jean’s mind. She bit her lip to contain the scream that sought to force itself from her throat. The voice continued, cold as the wind itself. “Do not be alarmed. This is but the first of the strangeness your shall encounter on your new life here at Xavier’s School for Gifted Youngsters. After all, you are not without oddity yourself, are you?”

“Yes,” Jean said quietly, as the memory of how the Grey parlor erupted with wails and cries of dark magicks after she found she could lift the tea tray into the air by extending nary a hand, only her will. “It was why I was sent away.”

“And why we have claimed you.” Xavier was speaking as men do, now, his voice no longer echoing in behind Jean’s temples. “Come now, join my other children of this new age!”

Scott turned away from Jean, the blood red of his eyeglasses reflecting the building storm clouds outside the mansion instead of her confounded face.

“You’re not more than sixteen years of age,” Jean said.

“Be that as it may,” Scott ran a white-knuckled hand through his loose brown curls. “I have a beast within me. A crimson force I cannot control. Were these lenses to slip from eyes, all I look upon would be destroyed in an instant.”

“We all have our difficulties in this life,” Jean said. “You fear what may happen if I get too close. But it is my destruction that frightens you so, or is it your emancipation?”

“Your destruction. Definitely.” Scott turned to Jean, his chest heaving. “I have seen it before. Those who have been lost to this fire from eyes…I cannot bear to think of it…”

“Think of it no longer.” Jean put a delicate gloved hand on Scott’s breast, feeling the force of his labored breathing with every fibre of her being. “Know that whatever trouble befell those before, I know you will heap thousand fold measure of kindness toward me. I can feel it, within your heart.”

“What can you know of my heart!?! What can any woman?” Scott tore himself away from Jean’s touch. “Have I mentioned I am an orphan?”

“What is the matter with Scott?” Jean proposed at breakfast. “He does nothing but study and train with the Professor.”

“He is consumed by the darkness which is our birthright as children of the new age,” said Henry, as he dexterously used his toes to spread marmalade upon his toast in order to leave his hand free to turn the pages of a massive tome. The opulently-carved chair barely held his simian physique. “We all are, though the wounds that darkness creates have cleft Scott’s soul particularly deep.”

“I have no idea what you’re talking about,” said Bobby, his cheeks ruddy as if he had spent the dawn hours traipsing through the snow. “I certainly don’t have any such wounds.”

“Except for the fact you’re a homosexual?” Jean said, barely looking up.

“W-w-what makes you say that?” Bobby’s face drained to the color of frost.

“I too, do not know of the darkness of which you speak,” Warren said. “Now, if you’ll excuse me, I shall spend the rest of morning as a metaphor for all our hopes and dreams.”

Warren unfurled the great white wings from his back and took off through the open window, as the very thing that separated him from the rest of humanity carried him to heights a normal person could ne’er imagine possible.

“Jean, I would like you meet an old friend of mine.” Xavier motioned to tall, brooding man with a shock of white hair. The stranger’s long purple cape undulated about him, though there was no wind inside the mansion. “Jean, this Erik. Like you and I, Erik possesses gifts unheard of by the populace. But unlike us, he fancies himself king of this new age.”

“You mock me, Charles,” Erik said. The boom of his voice echoed amongst the mansion’s chambers. “The locust has no king. And neither should we.”

“Should we be locusts, then?” Jean found herself intrigued by this Erik, the sadness and depth behind his piercing eyes. “Lay waste to the crops of man to feed our own hunger?”

“Man deserves no better.” Erik cocked his noble chin. “Unless you think otherwise?”

“I think the fate of man is yet to be written,” Jean said. She found herself being drawn closer to his dark gentleman, as steel was pulled toward a magnet.

“Ha, ha!” Erik through his head back in a thunderous laugh. “I like this one, Charles. You should leave the Xavier Institute behind and join my Brotherhood.”

“You wish me to join you…brotherhood, did you say?” Jean twisted her hands. There was something undeniably attractive about Erik, but she could also sense an incredible danger about him. And what of Scott? How could she possibly choose, here and now?

“Yes,” Erik gave a low bow. “I would be honored if you joined my Brotherhood of Evil.”

Jean’s face crumpled in disgust. “Do you have to name the group that?”

Erik rose to face her. “Is there a problem?”

Erik’s princely forehead contracted in confusion. “I don’t see how.”

“Our love will never be,” Scott said. He fell to his knees in anguish. “It is more than the force blasts that come from eyes that pushes us apart!”

Jean reached out with her mind, and lifted Scott bodily off the ground. Through the force of sheer will, she brought the boy close. “You may have hurt others, but not me. Is that not what love is?” Blog
Downton Abbey Characters Meet Their X-Men Counterparts
We use cookies on our website to personalize your experience, to conduct analytics, and to provide targeted online advertising. For more information and to opt-out of cookies, please see our Privacy Policy. By clicking “Accept All”, you consent to the use of ALL the cookies. However, you may visit "Cookie Settings" to provide a controlled consent.
Cookie SettingsAccept All
Manage consent