Meet the lesser of all evils!

Every hero needs a villain. But not all villains are dangerous—some are incompetent, comical, or just . . . weird. In his follow-up to The League of Regrettable Superheroes, author Jon Morris presents over a hundred of the strangest, most stupefying supervillains to ever see print in comics. Meet D-list rogues like Brickbat (choice of weapon: poisonous bricks), Robbing Hood (steals from the poor to give to the rich), Swarm (a crook made of bees; Nazi bees), and many more. Drawing on the entire history of the medium, The Legion of Regrettable Supervillains affectionately and hilariously profiles oddball criminals from the history of comics.

The Art of Miss Peregrine’s Home for Peculiar Children Tim Burton's adaptation of the Ransom Riggs novel Miss Peregrine's Home for Peculiar Children is one of the most anticipated films of the year—and this lavishly illustrated companion offers a thrilling behind-the-scenes look. Written and designed by two of Burton's longtime collaborators, this book chronicles every step in the making of the film—from script development and casting to concept art, set design, costumes, visual effects, and much more. Filled with exclusive interviews, on-set photography, and special introductions by Tim Burton and Ransom Riggs, this deluxe hardcover volume is a terrific gift for peculiars of all ages!

Stuff Every Graduate Should Know Everything you need to take on—or take over!—the real world
Just because you’ve got a diploma in hand doesn’t mean you know everything! This ultimate pocket-sized guide for life after school is filled with information for every step of the road to adulthood, including:

• How to Find Your First Apartment
• How to Write the Perfect Résumé
• How to Survive Living with Your Parents
• How to Make (and Stick to!) a Budget

Plus tips for staying in shape, building a professional wardrobe, throwing a real dinner party, and everything else a newly minted grown-up needs to know.

Partial TOC:
Personal Stuff:
How to Build a Grown-Up Wardrobe
How to Take Care of Yourself When You’re Sick
How to Stay in Shape
Medical Care
How to Handle Depression
Living Stuff:
Apartment Hunting
How to Coexist with Roommates
How to Deal with Living with Your Parents
How to Make a Meal Plan and Grocery Shop
How to Clean House
Job and Money Stuff:
How to Write a Résumé
How to Nail an Interview
How to Understand Your Paycheck
How to Make (and Stick to) a Basic Budget
How to Buy a Car
Social Stuff:
How to Make New Friends
How to Host a Dinner Party
How to Ask Someone Out
How to Break Up with Someone
How to Attend a Wedding 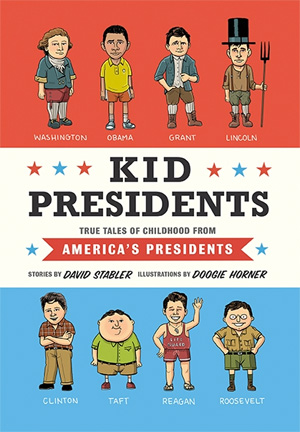 Every president started out as a kid! Forget the legends, tall tales, and historic achievements—before they were presidents, the future leaders of the United States had regular-kid problems just like you. John F. Kennedy hated his big brother. Lyndon Johnson pulled pranks in class. Barack Obama was bothered by bullies. And Bill Clinton was crazy clumsy (he once broke his leg jumping rope). Kid Presidents tells all of their stories and more with full-color cartoon illustrations on every page. History has never been this much fun! Experience the Star Wars saga reimagined as an Elizabethan drama penned by William Shakespeare himself, complete with authentic meter and verse, and theatrical monologues and dialog by everyone from C3PO to Admiral Ackbar.

Prithee, attend the tale so far: Han Solo entombed in carbonite, the princess taken captive, the Rebel Alliance besieged, and Jabba the Hutt engorged. Alack! Now Luke Skywalker and his Rebel band must seek fresh allies in their quest to thwart construction of a new Imperial Death Star. But whom can they trust to fight by their side in the great battle to come? Cry “Ewok” and let slip the dogs of war!

Authentic meter, stage directions, reimagined movie scenes and dialogue, and hidden Easter eggs throughout will entertain and impress fans of Star Wars and Shakespeare alike. Every scene and character from the film appears in the play, along with twenty woodcut-style illustrations that depict an Elizabethan version of the Star Wars galaxy. Frozen heroes! Furry creatures! Family secrets revealed! And a lightsaber duel to decide the fate of the Empire. In troth, William Shakespeare’s The Jedi Doth Return has it all!

How to Succeed in Business without Really Crying For many years, television comedy was an exclusive all boys’ club—until a brilliant comedian named Carol Leifer came along, blazing a trail for funny women everywhere. From Late Night with David Letterman and Saturday Night Live to Seinfeld, The Ellen Show, and Modern Family, Carol has written for and/or performed on some of the best TV comedies of all time.

This hilarious collection of essays charts her extraordinary three-decade journey through show business, illuminating her many triumphs and some missteps along the way—and offering valuable lessons for women and men in any profession. Part memoir, part guide to life, and all incredibly funny,How to Succeed in Business without Really Crying offers tips and tricks for getting ahead, finding your way, and opening locked doors—even if you have to use a sledgehammer.

Carol Leifer is a four-time Emmy nominee for her writing on such shows as Seinfeld, Modern Family, Saturday Night Live, The Larry Sanders Show, and seven Academy Awards telecasts. She has starred in five of her own comedy specials, which have aired on Showtime, HBO, and Comedy Central. Her previous book was the national best seller When You Lie about Your Age, the Terrorists Win.