A Playlist for Sherlock Holmes 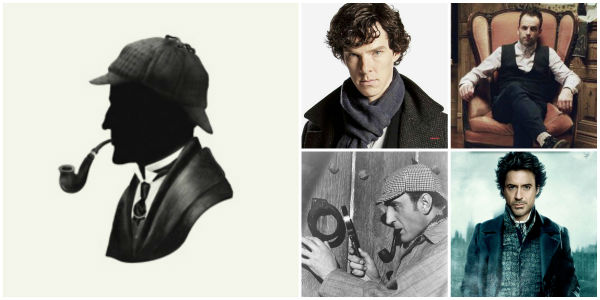 Sherlock Holmes is literature and pop culture’s most iconic sleuth. He’s clever, intuitive, quirky, and yes, arrogant. Sherlock isn’t afraid to break rules or social conventions, but his fierce logic always wins out and solves the mystery. And since he plays the violin, we know he enjoys music. We put together a perfect playlist a modern day sherlock would enjoy while solving crimes in the shadows of London.

A man with a healthy ego like our beloved Sherlock would be thrilled to have a song named after him. Particularly one in which the narrator praises the detective and yearn to be like him:

“Fog matters to you and me,
But it can't touch Sherlock Holmes
Dogs bark and he knows their breed
And knows where they went last night
Knows their masters too.”

That’s what we’re here for Mr. Holmes to do, isn’t it? This song is about losing faith and finding great inner strength to face adversity. In particular, the line “I believe that I rule my world” is one that must resonate with the great investigator.

This song illustrates the way a sensitive idealist is hardened into an intellectual. Chances are, Sherlock would have a different interpretation of these lyrics and see the transformation as a massive improvement:

“But then they send me away
To teach me how to be sensible,
Logical, responsible, practical.
And they showed me a world
Where I could be so dependable,
Clinical, intellectual, cynical.”

Sherlock follows his own rules, isn’t afraid to go against the grain, and isn’t afraid to stand up to authority—and even break the law—when it suits his needs. While he’s often described as a Bohemian, there’s also something punk rock about his attitude. His rebellious (and sometimes snarky) spirit is reflected here:

Being one himself, you know our favorite investigator is going to side with society’s misfits. This Brit-Pop ode to the underdogs’ rise to domination using brains over brawn is surely one Mr. Holmes has in heavy rotation. He’s likely particularly fond of the second half of the rousing chorus:

“We want the things you won't allow us
We won't use guns, we won't use bombs
We'll use the one thing, we've got more of
That's our minds”

Nick Cave’s songs often explore the more sinister side of humanity, so they are perfect for Sherlock to listen to when getting into the mindset of a criminal. “Red Right Hand” is a particularly catchy ode to evil:

“He's a ghost, he's a god,
he's a man, he's a guru
You're one microscopic cog
in his catastrophic plan
Designed and directed by
his red right hand.”

“Smarter Than You” – The Undertones

If Sherlock had to pick a single anthem, it could very well be this song. Because, let’s be honest, it’s probably true; he’s smarter than most of us. And he wouldn’t shy away from flaunting his superior brain, singing:

“We Are Detective” – Thompson Twins

First, let’s set aside the title’s grammatical issues of pairing a plural pronoun with a singular noun. That said, this song of paranoia and investigation is perfect for when Mr. Holmes wants to enjoy a light, new wave groove.

“We dress up in disguise
To get away from all those prying eyes
Our friends all think we're mad
But we know better.”

As someone who spends a lot of time in his “mind palace” and who can intuit a great deal about a person’s character with minimal cues, Sherlock is bound to be fond of songs with a cerebral theme. A sample lyric:

“Is it a cry for help
or call to arms?
Frustration
False alarms
It's psychological

While this song was inspired by the work of Raymond Chandler, the moody, melodic number can just as easily apply to Sir Arthur Conan Doyle’s fictional sleuth:

What other songs do you think Sherlock Holmes would in his playlist? Let us know on Twitter at @QuirkBooks!

And below for handy listening, is a Spotify playlist for all the songs featured in this post: Blog
The Sherlock Holmes Handbook: A March Quirk Perk!
We use cookies on our website to personalize your experience, to conduct analytics, and to provide targeted online advertising. For more information and to opt-out of cookies, please see our Privacy Policy. By clicking “Accept All”, you consent to the use of ALL the cookies. However, you may visit "Cookie Settings" to provide a controlled consent.
Cookie SettingsAccept All
Manage consent