Ten Times Leslie Knope Made Us Fall in Love with Waffles

Yesterday was Waffle Day and while there’s no greeting card to commemorate this very silly holiday, there are several Parks and Rec moments that remind us to make Waffle Day every day. We’re looking back at all seven seasons of Parks and Rec and celebrating our very favorite waffle moments. It’s what Leslie Knope would have wanted.

In Season 1, Episode 3, Leslie gets off message during an interview with Pawnee Sun reporter Shauna Malwae-Tweep. When she realizes the magnitude of her mistake, she calls Shauna to ask for a do over, promising to buy her lunch in exchange for another chance at the interview. While it’s not journalistically sound, Shauna agrees to meet for lunch at JJ’s Diner. Because Leslie’s excuse for “acting weird” during the interview was food poisoning, Shauna is confused when Leslie orders waffles with whipped cream for lunch. “Are you sure that’s the best thing for you right now?” Shauna asks. “Oh, it’s the best thing on the menu,” Leslie responds. And thus begins a seven season love affair with waffles.

In Season 2, Episode 20, after a terrible picnic lunch with all the former living Parks Department directors – men who clearly don’t care about parks at all – Ron takes Leslie out to JJ’s Diner for “the usual.” Though consoling others isn’t part of Ron’s personality, he does offer Leslie some sound wisdom for her career. And when both of their orders arrive – eggs and bacon for Ron, waffles with whipped cream for Leslie – she sounds incredibly content. “Why would anyone ever eat anything besides breakfast food?” she asks. And Ron responds, “People are idiots, Leslie.” And not only is it the perfect thing to say about breakfast foods haters, it’s also the most reassuring thing he could have said about Leslie’s whole day.

#3: Waffles at the Hospital

In Season 3, Episode 2, a very sweet Ben Wyatt visits Leslie Knope in the hospital. Leslie is dehydrated and disoriented – a reluctant victim of the flu. Ben offers her homemade chicken soup to nurse her back to health and, in a true act of friendship, delivers a care package of waffles. (A gift from JJ to his favorite customer.) Leslie abandon’s Ben’s soup for the waffles. Because of course she does.

In Season 4, Episode 5, Tom Haverford’s ludicrous business Entertainment Seven Twenty goes out of business and Leslie takes him out for conciliatory waffles in an effort to heal his wounds. When Tom tells Leslie that he made an amazing video biography to help her city council campaign, the pair heads back to the office to watch the video, waffles in hand. But not before Leslie got her way. “Didn’t I ask for whipped cream on this?” Leslie asks, pointing to a stack of waffles clearly decorated with the sugary goodness. “Ma’am?”

In Season 5, Episode 1, Leslie Knope takes an unforgettable trip to Washington, DC to visit her boyfriend Ben Wyatt. But the trip is just as much for her as it is for their relationship. She has a Pawnee River Cleanup to propose to the Department of the Interior, plus there are so many museums and monuments to see. And where else is she going to find a parade of food trucks, including one that sells waffle sundaes? It’s DC at its finest.

Blink and you’ll miss it, but in Season 5, Episode 14, Leslie and Ben’s wedding is made extra special by the special appearance from JJ himself. The restaurant owner and number one fan of the city councilwoman shows up at the impromptu wedding, giving Leslie and Ben the breakfast food reception of their dreams.

When Ann Perkins has to deliver some friendship changing news in Season 6, Episode 3, she came prepared. “Chris and I have been talking,” Ann begins, “and we have been thinking very seriously about leaving Pawnee and moving somewhere else to start our family.” And before she even finishes her sentence, she tries to divert Leslie’s boiling anger with a plate of waffles. It’s an amazing friendship move. Honestly, we would forgive anyone who was surprising us with waffles at work.

#8: Waffles with the National Parks Service

When Grant Larson returns to Pawnee with Leslie’s “Questions About the Job” binder, the two meet at JJ’s Diner to discuss next steps. When she sees that all of her questions are answered – in multicolored Post-It notes, no less! – she counters with another binder: “More Questions About the Job.” Certain that it’s going to be a long meeting, Leslie orders her food in duration, not quantity. “Martha,” she says, a natural regular, “I’m gonna need two hours worth of waffles.”

Celebrating Galentine’s Day without Ann just doesn’t feel right, but Leslie does anyway – in a belated and unfortunately forced way. In Season 6, Episode 16, she rounds up every woman she knows for brunch at Bluebell Cafe, including Shauna Malwae-Tweep and Evelyn AKA Fake Ann AKA Leslie’s Health Department colleague whose last name she hasn’t bothered to learn. Instead of a celebration of female friendship, this Galentine’s Day is a secret competition to see who Leslie will allow to become her new Pawnee best friend. Only it’s a competition none of these women know about or want to participate in. Waffles, anyone?

By Season 7, Episode 6, it’s clear that Pawnee is undergoing some major changes. (Thanks in no small part to Grizzle’s move to the area.) So, while it’s not surprising that JJ’s Diner was bought out by the perfume magnate Dennis Feinstein, it’s still pretty upsetting – especially for Leslie. The Episode “Save JJ’s” is the only all waffles all the time episode in the series and it’s appropriate and genuinely sweet that Parks and Rec ended with a love letter to Leslie’s one true love. 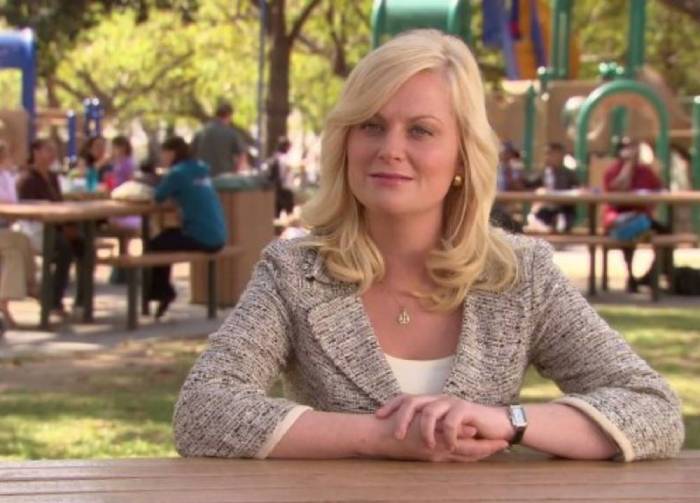