Ghostbusters Is Back, But the Pursuit of Ghosts Never Left It’s been thirty-seven years since the original Ghostbusters hit theaters. I was ten years old and sat in one of those theaters with a bucket of popcorn, entranced by what I saw on the screen. Ghosts, slime, a giant marshmallow stomping through New York City, and Ray Parker Jr.’s “Who You Gonna Call?” stuck in my head—this movie had it all.

Now, as 2021 comes to a close, the franchise is back with Ghostbusters: Afterlife to explore how the world has progressed—particularly in the case of Egon Spengler’s family. When his granddaughter finds his old ghostbusting gear, the spirits, it seems get released once again. The Spiritualist beliefs of Dan Aykroyd’s own great-grandfather, Samuel Augustus Aykroyd, in the early 1900s inspired the original the film, so perhaps this new storyline serves as a personal homage. Dan’s own children have carried on the family interest. One of his daughters, he alleges, even affects photographs with “glops of light” around her when taken in or near the family farmhouse.

Ghostbusters, like Spiritualism in the Aykroyd family, has had an effect on the generations that have followed. For many, the 1984 blockbuster was a revelation that opened up an entire world of searching for evidence of the afterlife. As I discussed in my book, Chasing Ghosts: A Tour of Our Fascination with Spirits and the Supernatural, capturing ghosts with the aid of technology dates back to the 19th century, but Ghostbusters exposed the idea of parapsychology to the broader public. Maybe they, too, could catch a Slimer. Instead of wearing unlicensed nuclear accelerators on their backs and shooting proton streams at spirits, these new inspired Venkmans, Stantzes, Spenglers, and Zeddemores discovered EMF readers and other gizmos that light up, record noises, sound alerts, and attempt to find evidence of either the paranormal or just the plain old normal.

One of these devices in particular, the spirit box, has become especially popular. It’s essentially an altered radio that rapidly sweeps through frequencies and generates white noise. Users believe that spirits can thrive on the energy and manipulate it to manifest words, some of which may form intelligent responses. Some models even come with MicroSD cards to record spectral messages and flashlights to seek spirits without becoming a thing that goes bump in the night. They bring a whole new level of convenience to the modern ghostbuster.

But are the EVPs (electronic voice phenomena) they capture truly words from the dead? Or are listeners experiencing an effect called apophenia, in which the brain makes sense of patterns it’s hearing? This can also lead to groupthink, meaning that once a word or phrase is suggested as being heard, it’s quite easy for others to it hear, too.

In Chasing Ghosts, I wrote about one set of paranormal investigators whose unique way of using the spirit box attempts to avoid such pitfalls by separating a team into a single listener and one or more questioners. The listener is blindfolded to deprive the senses and wears headphones to receive a direct feed from the spirit box. Whatever that person hears, they announce. Afterward, they find out what questions were asked. This way there’s no room for groupthink. Isolating the listener from the questioner has occasionally given results demonstrating intelligent responses seemingly carrying on a two-way conversation.

The investigators, Karl Pfeiffer, Connor Randall, and Michelle Tate, came up with the idea, known as the Estes Method, in 2016 while working at the allegedly haunted Stanley Hotel in Estes Park, Colorado. The Stanley, of course, is where Stephen King stayed many years ago and found his inspiration for The Shining.

In one of their sessions, a friend, Mark, held up four fingers and asked the ghost how many he was holding up. As they all sat in the balcony of the Stanley’s concert hall, where spirits are believed to roam, they didn’t have to wait long for a response. Randall, acting as the listener, began speaking right away, first announcing “Mark sees it,” and “You want numbers now?” and then offering a string of numbers: “six . . . seven . . . nine . . . can’t tell . . .”

The exchange continued, and though the ghost couldn’t count the fingers, it certainly seemed to understand the challenge at hand.

“The numbers one was the best session we’ve had because, before that, we’d get two or three direct responses towards what we were asking about,” Pfeiffer says, “but to hear a stream of numbers like that—I asked Connor about it later and he said, ‘I was hoping you guys asked for the winning lottery numbers.’”

Randall recommends finding a comfortable place to relax while listening to the box, and he noticed that holding the antenna helps create better activity. “It adds into this nice symbology of the human being becoming the antenna themselves,” he says. “If you hear something, say something. You don’t want to sit and think about the answers. You don’t add editorial opinions. You just spout out what is coming across that feed as quickly as possible.”

So are ghosts actually coming through the radio waves? That’s one theory the team offers. Alternatively, they believe it might be a way for the spirits to communicate through our minds. Perhaps listening to the bits of sound through the radio placates the conscious mind and, as Pfeiffer suggests, “allows the unconscious brain to recognize sounds that aren’t there, or manifest them or produce or hear them in a psychical sense.”

To date, no spirit box or other machine has definitively caught a ghost. But the possibilities and enthusiasm for finding proof continues to motivate experimentation and investigations, not to mention countless TV shows. Perhaps Ghostbusters: Afterlife will inspire the next generation to pursue new types of technologies and methodologies, and maybe inch us closer to answering the age-old question of what happens when we die. If nothing else, we can all be sure to have Ray Parker Jr.’s immortal theme song stuck in our heads once again.

From Marc Hartzman, author of of Chasing Ghosts: A Tour of Our Fascination with Spirits and the Supernatural. 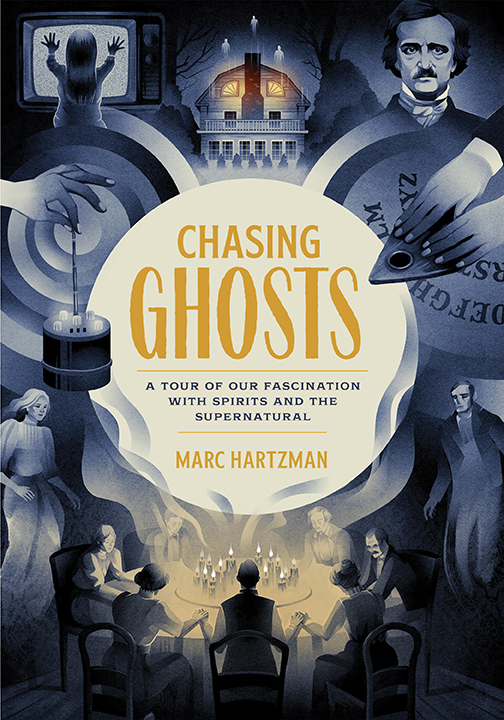 by Marc Hartzman
From Ancient Egypt to The Martian, A Deep-Space Dive into Our Obsession with the Red Planet Blog
Quirk Perks: Get 100 Ghosts by Doogie Horner for Only $3.99 All of October! Blog
What Would I Read If I Only Had Six Months Left To Live?
We use cookies on our website to personalize your experience, to conduct analytics, and to provide targeted online advertising. For more information and to opt-out of cookies, please see our Privacy Policy. By clicking “Accept All”, you consent to the use of ALL the cookies. However, you may visit "Cookie Settings" to provide a controlled consent.
Cookie SettingsAccept All
Manage consent