The bright and insightful guide to birthday colors is back with an all-new cover inspired by the iconic Pantone color system. Discover every vibrant aspect of your personality with Colorstrology, a fascinating blend of astrology, numerology, and color theory that offers exciting new insights about our lives and relationships. Written by renowned astrologer Michele Bernhardt using the numbers and color schemes of Pantone, Inc., the global authority on color, the system features 366 “birthday colors” that illustrate who we are and how we behave. Using Colorstrology, you’ll quickly understand how to enhance your best personality traits with your birthday color. This full-color book features detailed profiles of everyone you know, plus 366 perforated swatches so you can take your birthday color wherever you go.

Stuff Every Man Should Know 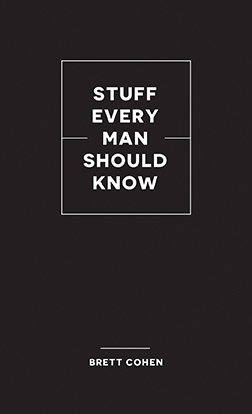 This little gift book is packed with tips, tricks, and life hacks for the modern Renaissance man.

With chapters on domestic life, personal appearance, etiquette and socializing, business and pleasure, love and relationships, and health and wellness, it’s the ultimate little black book for men of all ages. You’ll find all the answers in a concise but comprehensive pocket-sized package.

This handy reference guide features everything the modern man should know (but might not), including:

Plus wardrobe essentials, advice on car maintenance, how to start a conversation in five languages, exercise tips, grilling instructions, and much, much more!

Stuff Every Woman Should Know This pocket-sized handbook features all the skills a modern lady needs!

This little gift book is packed with tips, tricks, and life hacks for women who need to know everything. With advice on etiquette and social situations, entertaining and cooking tips, do-it-yourself instructions, health information, self-defense techniques, and much, much more, this is the ultimate—but petite!—reference guide for go-getters, self-starters, and independent women everywhere. Featuring:

To Quote a Queer We’re here. We’re queer. And we’re hilarious! Not to mention eloquent, bitchy, poetic, luminous, and dead-on brilliant! To Quote a Queer features more than 2,500 quotations on a host of subjects, including:

Body Image: “To be gay and out of shape is almost as much of a stigma as just being gay used to be.”—Bruce Vilanch

Fashion: “If I am occasionally a little overdressed, I make up for it by being always immensely overeducated.”—Oscar Wilde

Homophobia: “A lot of people are not homophobic, but they think they’re supposed to be. They think that if they don’t express prejudice, people will think there’s something the matter with them.”—Barney Frank

Therapy: “I think I have OCD or ADD or some other three-initial ditty. Whatever it is, it’s exhauasting.”—Rosie O’Donnell

Truth: “I don’t care what anybody says about me as long as it isn’t true.”—Truman Capote

Childhood: “Bike-riding and tree-climbing may be typically boyish, but they were merely means to my sissified ends; I wanted, like an eight-year-old Garbo, to be alone.”—Dan Savage

Coming Out: “What happened to me is exactly the opposite of what closeted people fear. They think they’ll lose everything if they come out. This did not happen to me at all. In fact, everything came back tenfold.”—Melissa Etheridge

Fame: “When you become a public figure, you become at the same time a product, and people actually look at your ‘expiration date,’ you know? They look at your age and say, ‘Hmm. How fresh is this one?’”—RuPaul

And much more. Hitting shelves just in time for summer’s pride festivities, To Quote a Queer is the perfect gift for gays and the people who love them.

JOHN LESSARD is assistant professor of English and film studies at the University of the Pacific in Stockton, California.