I have a confession to make:

I like fanart so much my first stop at conventions is Artist Alley. I will easily drop a hundred dollars on the perfect Victuuri postcard or a wood-block print of Chihiro and Haku. I’m always on the lookout for new fanarts to put up in my office. It helps keep my writing space fresh and colorful and I get to give money to artists I adore. It’s really a win-win.

So without further ado, here are some of my recent favorite pieces of non-Geekerella fanart for your enjoyment. I hope you find a new artist to love and support, and definitely @ me on Twitter with your favs as well! 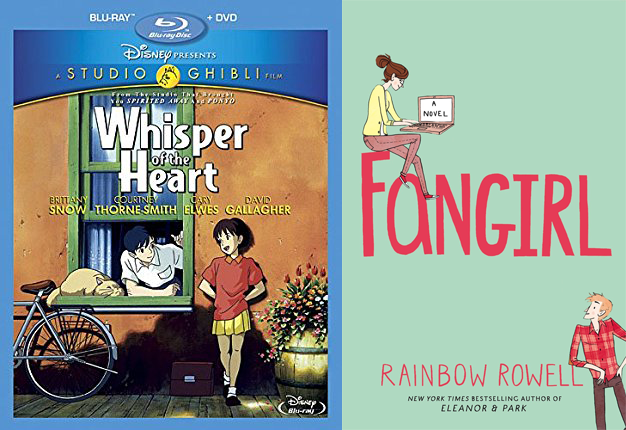 I love Studio Ghibli. When Howl’s Moving Castle came to theaters, I must’ve taken the hour and a half drive four—maybe five?—times to the only theater playing it in my region. I loved the colors, and the characters, and the story (even though it was miles different from the novel by Diana Wynne Jones, which I love equally as much and re-read every year). The Cat Returns is my pick-me-up whenever I feel sad, and Porco Rosso is the hilarious and heartfelt comfort on rainy days.

My other comfort, my love, my obsession—is books.

So I thought, why not try to pair the two together like a nice cheese and some red wine?

The Fangirl and the Door To fangirl or not to fangirl?

I’ve asked myself this question more times than I can count. Is it socially acceptable to squeal in the theater when the new trailer for Thor: Ragnarok brings us hot-lips Hemsworth? When a new comic comes out, how much can I fangirl at the register to the hipster cashier? At Disney World, can I stand in line for Gaston and have a flexing contest? If I have the windows down in my car, can I blast the Steven Universe soundtrack so loud I drown out the bro beside me blasting his indie rock?

The answer—always—is hell to the yes.

It was a place I visited often and knew the catchphrases to, but it wasn’t where I fit. Growing up, being a fangirl had not yet become something you aspired to be. It was a secret you printed out in the computer lab and shoved in the front of your clear plastic binder. It was scanlations you read during middle school lunch. It was the duels you challenged your best friend to on the back of the bus. The Blue-Eyes White Dragons you summoned. The bullies you wanted to SEND TO THE SHADOW REALM—

My generation was gifted with a lot of fandoms. I’m the Harry Potter generation. I’m the Pokémon generation. The Kids WB, the Cartoon Network, the Adult-Swim-on-Saturday-nights-with-Inuyasha-and-Fullmetal-Alchemist generation. I’m also, I am proud to say, the Yu-Gi-Oh! generation.

Oh man, lemme preach to you the love and devotion that is the Yu-Gi-Oh! fandom. Let me introduce you to Yu-Gi-Oh! abridged. Let’s discuss our most devastating card combos, our favorite character ships, our most-watched episodes. Let’s scowl together at the terrible 4Kids dub that, although we try to deny it, is engrained into our childhoods like those washable fruity tongue-tattoos that stain your mouth for weeks. Let’s talk about which names we like better—Anzu or Tea? Jounouchi or Joey? Why the hell did 4Kids name Honda “Tristan”? Remember when, like, four episodes into the show, Tristan’s voice mysteriously changed when they swapped out voice actors? Or when Yuugi’s spikey hairdo became synonymous to the weed symbol for a hot minute?

Oh man, those were the days.

My favorite character is Atem—erm, Yami. The dub calls him Yami, but it’s just a shortened version of “Yami no Yuugi” which translates to Dark Yuugi (and he earned that name like whoa. See episode one, where he basically breaks Seto Kaiba’s mind)—anyway, Yami’s true name is Atem, and he’s an ancient Egyptian pharaoh who was trapped in the Millennium Puzzle for 5,000 years (3,000 in the Japanese version—numbers smumbers, amirite?) and can possess Yuugi to do Epic Card Battles.

Ohmygod, so much to absorb. Still with me?

So, as a somewhat-maniacal spirit with a heart of gold and an ego the size of the Great Pyramid, of course Atem became my favorite character—full stop. He is also part of my favorite OTP…

…which includes Yuugi, the teenaged boy he shares a body with.

Their entire relationship is spiritual. Literally. They have soul rooms, right? Atem’s room is a sandier version of Jareth’s stairwell maze—staircases running this way and that, trap doors and trick edges, while Yuugi’s room is full of children’s games and toys and it proves that he’s a super-special awesome cinnamon roll. One is a few thousand years old. One’s sixteen. One had his memories erased. The other wants to help him regain them. But then they both realize the best memories are the new ones they make together! Y’all, my heart is so full just thinking about it. This ship has layers! So many layers! It is an OTP that has birthed thousands, if not hundreds of thousands, of fanfics.

It even has its own name: puzzleshipping.

Through my first OTP, and a dire need for my pre-teen (and, later, teenaged) self to read all the fanfic, I found the fandom, and through the fandom I found . . . Well, I found home, y’all. Or the beginning of one. I found, after years of searching through books and TV shows and video games and movies for some sort of connection—like traversing the labyrinth in Atem’s soul room—I found a door. A door that I could open.

And on the other side were things that middle-school me never knew I needed. A best friend in a stranger who asked if I was reading the last chapter of the manga. A community that helped me find myself. Hundreds of thousands of memories and inside jokes that made me feel like I was—finally—part of something bigger. My first cosplay. My first message-board RPG.

A fanfic that led to another fanfic, and then another, and then another—until I grew a taste for my own characters and worlds. And then I began to write those, too. My first fandom opened a door, and when I stepped through it I never looked back. Readers, I’m not saying that all fandoms are everything to everyone, but one fandom may be the world to one person. One book, one comic, one character, one OTP—it’s a wonder what shape a key takes to open a door.

And I’m glad I stepped through mine.

I found happiness in a thirty-minute time slot on Kids WB, and it’s one I keep chasing years after the series ended.

And now, in every new fandom I join, I find it again.

**The spellings of names in this blogpost are reflective of the years the author has spent in the Yu-Gi-Oh! fanfiction archives. So forgive her for adding an extra ‘u’ in Jonouchi and Yugi’s names. Sometimes you can take the girl out of the fanfic, but you can never take the fanfic out of the girl. Satire inspired by Hamilton/Anything for a Vote

Here are ten quintessential rules for running for election, as told (well, more shown than told, but I’m sure he would’ve told you anyway if he wasn’t dead) by the great Thomas Jefferson, author of the Declaration of American Independence of the Statute of Virginia for Religious Freedom.

Our Founding Father was many things—a bibliophile, a scholar, a lover of food, a violinist, a slave holder, and a two-time presidency-winning loquacious son of a gun.

So how did this prominently-born well-dressed son of a Virginian planter, skip the Revolution, knock up a few women, and still go on to win a presidency?

These are Jeff’s Ten Election Commandments.

The Best CosPlays We Found on The Internet Round-up

It’s hard to explain cosplay without actually living it. Some people think you’re crazy for spending so much money on costumes, while others revere you for looking nearly identical to Poison Ivy or Hatsune Miku. The sky’s the limit when it comes to who you can dress as, who you can be. For a few short hours, you can abandon your life and step into someone else’s shoes. Just like submerging yourself in a book, you become someone else. You transform. Think back on the last time you went to a bookstore. That aisle of brightly-colored books with numbers on their spines. No, not the encyclopedia aisle. The other one. The manga aisle, usually full of readers squatting down by their favorite series, reading voraciously with an adoring, excited look in their eyes.

And while you may know Sailor Moon, Dragon Ball Z, or that one with the card-playing kid with the spiky hair, you may NOT know just how many different kinds of manga there are. In fact, many manga have stories with a similar feel to some contemporary YA fiction. If you've never given manga a try, now's the time! So sit back, pull up a chair, and let’s get you reading some manga!