'80s Products We Haven't Thought About in Years

If you’re anything like us, you think about Back to the Future all the time. Your mornings are spent coming up with complex Doc Brown-inspired dog care contraptions. “Heavy” is your favorite piece of discarded slang. And every time you hear Chuck Berry’s “Johnny B. Goode,” you’re transported back to the Enchantment Under the Sea dance. We’re celebrating the upcoming release of Kim Smith’s beautifully illustrated Back to the Future by honoring a few '80s products we haven’t thought of in years – products paramount to the original Robert Zemeckis and Bob Gale film.

In the opening credits of Back to the Future, we get a peek into Doc Brown’s mind – and the chores he purposefully avoids. His robotic self-opening can opener dumps a can of Kal Kan dog food into a growing pile. Looks like someone forgot to shut off his inventions before heading out of town with loyal pup Einstein. And while Kal Kan was indeed a real brand of pet food, the production department invented the dog food product line for the film. A few years after Back to the Future’s release, Kal Kan changed its name to Whiskas, clearing things up for their clientele once and for all.

The Game of Life

Blink and you’ll miss it, but next to the television in the McFly family living room sits a copy of The Game of Life. Whether the product’s placement was purposeful or not, it feels like a metaphor for both Back to the Future and Back to the Future II. And if there was a DeLorean playing piece on the board mixed in with the predictable four passenger cars – for two married parents and their two children, naturally – we’d take this game a lot more seriously. The Game of Life is still in circulation and, sadly, as heteronormative as ever. But the app version of the board game appears to be making some strides towards that 2018 feeling. Marriage, kids, and a high paying job are still the ultimate goals in this game, but the latest version supports same sex marriage and allows players to opt out of children. We’ll take those small victories, thank you very much.

One of the biggest laugh lines in the whole movie is when Marty walks into Lou’s Café and asks for a Pepsi Free. Because it’s 1955, Lou had no idea what Marty was talking about. If he wanted a Pepsi, he was going to have to pay for it. (Kids these days.) Since it’s 2018, it’s very likely that you don’t know what a Pepsi Free is either. In 1982, Pepsi wanted to establish themselves as the purveyors of the first mainstream caffeine-free cola. The name was phased out in 1987, just two years after the release of Back to the Future, making the reference very of its time. But Pepsi still makes Pepsi Free – just under a different name. Today, the company uses the more matter of fact name Caffeine-free Pepsi. But think of all the banter Zemeckis and Gale would have to cut if Marty had to order the drink under that name.

In a world where underwear brands advertise on podcasts – we see you, MeUndies – it feels a little dated to have a major plot point hinging on the brand of underwear Marty McFly was wearing when he went back in time. When Lorraine starts calling Marty “Calvin Klein” because it’s the name written on his underwear, things quickly turn from a classic case of mistaken identity to a product placement landmine. Do you know how many times the name “Calvin Klein” is uttered in this film? We don’t either, but it’s a lot. And when Back to the Future is inevitably rebooted, we’re placing bets that Tommy John will win this coveted spot. 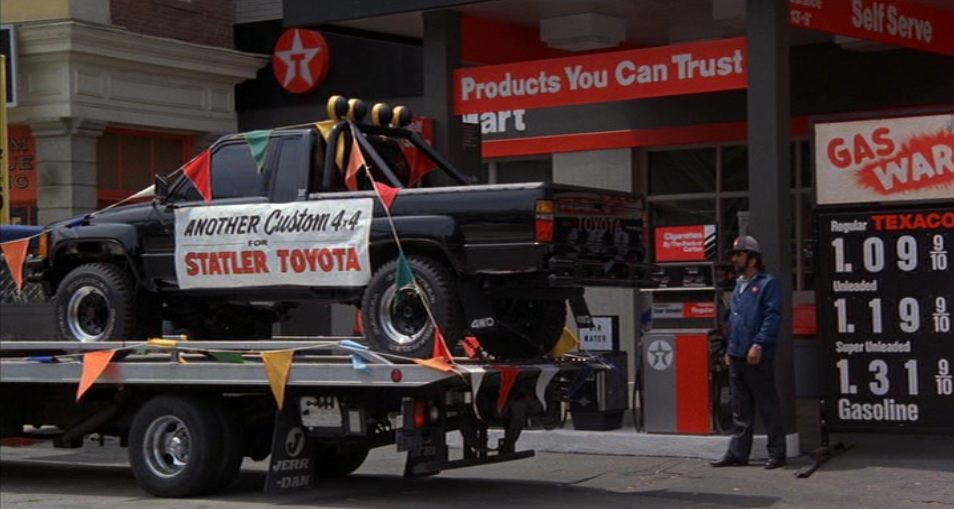 While a 2018 Marty McFly might pine for a Toyota Prius, 1985 Marty can’t take his eyes off the custom Toyota 4x4 that pulls into the Texaco service station in Hill Valley. For a kid who skateboards everywhere out of necessity, a car is the ultimate status symbol. And it’s appropriate that someone as obsessed with time as Marty would look for a vehicle that shouts “1985!” at every traffic signal. While this particular Toyota was made custom for the film, Toyota did pull out all the stops on Back to the Future Day on October 21, 2015. The auto manufacturer created a handful of Marty McFly-worthy trucks to celebrate the milestone, complete with tubular front and rear bumpers.

All stills from Back the Future, Amblin Entertainment.

BLOG The Matrix Resurrections: Other '80s and '90s Franchises That Deserve Follow-Ups

This beautifully designed atlas is an essential reference for anyone who loves great art and great films.

BOOK The Art of Miss Peregrine's Home for Peculiar Children