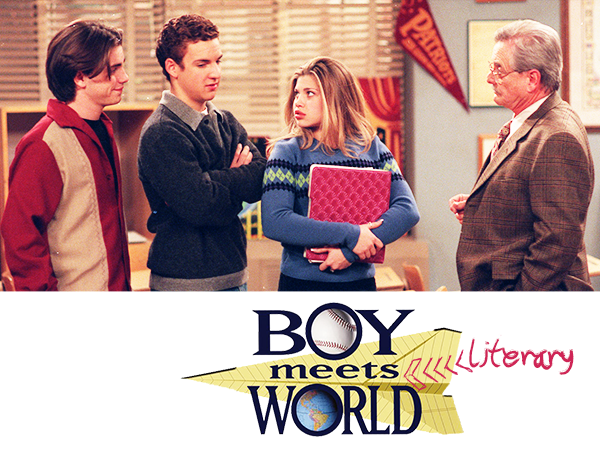 Boy Meets World is one of the most beloved sitcoms from the 1990’s. Many of us grew up learning life lessons from Mr. Feeny and the rules of friendship from Cory and Shawn’s bromance. However, Boy Meets World also has many bookish lessons to share.

Like any good television show with a school setting, Boy Meets World is filled with literary references. The book being studied in English class (and they studied a lot of books over one school year) always mirrored the episode’s plot line. The show sets up a great syllabus for “English Literature 101.” How many have you read from the list?

Romeo and Juliet by William Shakespeare
Mr. Feeny: “It’s about the power of love and how it affects us all.”
Cory: “You are aware that I’m eleven years old?”

“The Raven” by Edgar Allen Poe

The Diary Of A Young Girl by Anne Frank

The Odyssey by Homer

The Scarlet Letter by Nathaniel Hawthorne

The Grapes Of Wrath by John Steinbeck
(Which Cory reads backwards so that everything ‘before’ makes sense.)

Much Ado About Nothing by William Shakespeare

“The Road Not Taken” by Robert Frost
Shawn: “How does a poem about a guy on two roads have anything to do with our lives when we can’t even drive yet?”

Antony and Cleopatra by William Shakespeare

The Canterbury Tales by Geoffrey Chaucer

Of Mice and Men by John Steinbeck
Eric: “I can’t find the book anywhere! I’ve looked at every pet store in the city!”