[Image by Nik Shuliahin on Unsplash]

February 2020, A24 graced us viewers with an eerie and compelling teaser for David Lowery's The Green Knight, and after almost a year and a half of mass film postponements, Lowery’s promising (and loose) adaptation of Sir Gawain and the Green Knight is finally coming to theaters.

If you’ve never heard of this chivalric romance, you may have seen this teaser and the second trailer and thought, “Did Dev Patel just behead an Ent? Did that Ent just pluck up his head and trot away, cackling like the headless horseman?” You may be wondering if this Middle English poem also drops a halo-crown from thin air onto Gawain’s head before lighting his whole head on fire. Maybe you’ve never heard of ye old text and simply thought, “Does that Ent have an axe?” Yes and yes, sadly no, and definitely yes. The axe is important. The Ent is too.

Whether you’re a renaissance lit reader, you’re an Arthurian legend fan, or you just like a good adventure story with some action, mystery, magic, and drama, The Green Knight (and the sheer power of Dev Patel) is bound to leave viewers wanting more Gawain. Though Gawain is a major Arthurian knight and appears in quite a few tales and retellings, here’s a small handful to start with that give him the attention he deserves.

All right, let’s start with the OG text. Although this isn’t the first work Gawain appears in, this is by far Gawain’s most famous story and the narrative of which Lowery pulls from for his film. Who wrote this? No one knows. They’re called The Gawain Poet or The Pearl Poet, and that only makes this text cooler. It’s written in Middle English, and if you can handle words like pité (more or less piety, not pity) and trawþe (that’s an important one, meaning truth but like five other things as well, keep up), feel free to tackle the original. If you’re like most people and just want to enjoy the story, not study it, give J. R. R. Tolkein’s accessible translation a go (yes, that Tolkein). You’ll learn of Gawain’s pentangle and the five moral traits that come with his knighthood, and you’ll meet the giant green knight (Ent) who actually doesn’t have a death wish, loves his axe, and just likes to mess with people. And plus, it’s shorter than you’d expect!

Down the Long Wind series by Gillian Bradshaw

So you’ve heard of Gawain, but have you heard of Gwalchmai? Despite the Celtic name change, the main character of Gillian Bradshaw’s Down the Long Wind series is a recognizable version of Gawain, and it’s one new fans will want to dive right into. This trilogy starts with Hawk of May and follows Gwalchmai from his earlier days with his evil sorceress mother and hateful father all the way to Arthur's court and the king’s predestined end. The green knight tale doesn’t give much insight to Gawain’s past, like his family life or relation to Arthur, but its main focus is that of Gawain’s struggle to follow his moral code. Similarly, Bradshaw’s retellings give new fans a solid look into what makes Gawain such a fitting knight for a moral quest from his drive to become the best knight in Arthur’s court to his struggle to be more than what his parents warped him to become.

This one’s for those middle grade readers out there who need a whopping ten book series to jump into right after leaving the theater. Gerald Morris’s The Squire’s Tale series follows the original character of Terence and his adventures as the squire of Sir Gawain. With most installments averaging around 250 pages, these books make for quick, action-packed reads with a surprising amount of heart and humor. Although only half of the books follow Terence and Gawain directly, they give a lot of insight into the duality of Gawain from his gentle, good-humored nature to his fierce temper and reactive pride, and book two is, naturally, a retelling of the green knight tale. Morris also shines some light (haha) on Gawain’s unique ability to grow stronger with the sun, and he has a digestible explanation in the back of the first book highlighting the literary history of Lancelot replacing Gawain as Arthur’s best knight. Basically he breaks down why Gawain still holds a place in his heart, and it’s because Gawain is really darn cool.

The Once and Future King by T. H. White

Let’s take a step back to some more classical Arthurian stories. If you’re curious about all Arthurian tales but you’re too nervous to tackle the big kahuna Arthurian narrative, Thomas Mallory’s Le Morte d’Arthur, give the plain English of T. H. White’s The Once and Future King a go. For those cynical folks, it’s a rather biting satire of humanity and follows Arthur from childhood to death, and for those who enjoy more immersive classical stories, White really paints a picture with his lively interpretations of the characters and the world they inhabit. Robin Hood even makes it into this story, so there’s that. Really four books in one, the second book of this larger work, The Queen of Air and Darkness, steers from White’s Arthur focus and follows Gawaine and his three brothers Agravaine, Gaheris, and Gareth as they grow up with their neglectful and, yes, evil mother. It’s quite sad and gives you a lot of insight into how Gawaine could develop into such a complicated person. And unicorn lovers beware. There’s a brutal scene that involves a sobbing Gareth, and somehow, more beheading.

The latest of this suggested bunch, Tracy Deonn’s Legendborn is set in modern day America and follows high schooler Bree Matthews as she attends University of North Carolina for a residential program. Where does King Arthur come in? Well, there’s a secret society of magic users and warriors, all descendents of the original Knights of the Round Table. Ok, so this retelling doesn’t focus heavily on Gawain, but Gawain’s descendent, William, is a delightful addition to the narrative in the limited time he appears. Instead of emphasizing the aggressive and hotheaded aspects of Gawain’s character (looking at you, White), Deonn designed William to be the healer of the group and highlights some of his individual abilities, like his waning strength with the rise and fall of the sun. She also gave William a boyfriend, which fits with the vibes Gawain gives off in the green knight tale (no spoilers, but if you know, you know). Here’s to more William in the second book!

Are you a simple medieval adventure fan and would read any book with knights and chivalry and courtly love? Double check our medieval reads recommendations post for additional suggestions! 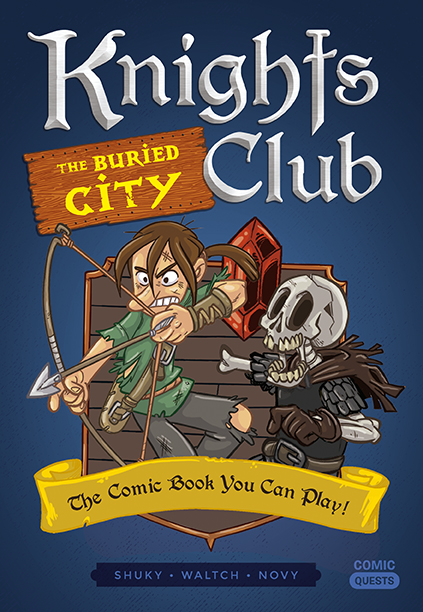 Knights Club: The Bands of Bravery