Possums Are Not Cute! 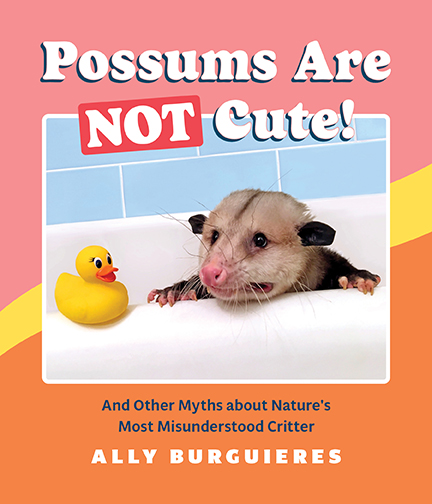 Possums may steal your garbage…but with this book, they’ll also steal your heart!

Possums are more than the ugly-cute icons of the internet. These so-called trash animals and pointy kitties are not only relatable avatars for anxious but resilient people everywhere, but nature’s secret clean-up crew.

Organized around common myths that have given possums a bad reputation, this fun and offbeat book reveals the truth about possums through dozens of adorable photos, informative illustrations, and fascinating facts.  Did you know that…

Written by wildlife rehabber and possum advocate Ally Burguieres, known for her popular Instagram account @ItsMeSesame, this accessible and giftable guide explains why possums deserve our admiration and offers tips on how we can protect and advocate for these magical marsupials. For fans of offbeat pop history, a spirited tour through the supernatural history of America, from its haunted sites to its famous ghosts to its ghost-obsessed pop culture.

Ghosts are everywhere–whether you believe in them or not. Every town has its local legends, and countless books, movies, and TV shows are haunted by their presence. But our obsession with ghosts runs deeper than we know–and is embedded in the very fabric of American history.

Writer and historian Marc Hartzman dons the mantle of tour guide, taking readers on a fascinating journey through supernatural history, including:

Deeply researched and presented in an entertaining and accessible way, Marc Hartzman expertly blends popular history, pop culture, and a trove of archival material that will satisfy believers and skeptics alike.

From notable geek girl Sam Maggs, The Fangirl's Guide to the Universe is the ultimate handbook for teens living the nerdy life.

Fandom, pop culture, feminism, cosplay, cons, books, memes, podcasts, vlogs, OTPs and RPGs and MMOs and more—there’s never been a better time to be a fangirl, or a better guide to navigate the wide universe of fandoms. This handbook is packed with tips, playthroughs, and cheat codes, including:

And more! Featuring wisdom from Sam and insightful interviews with fangirl faves like Danielle Paige, Rainbow Rowell, and Preeti Chhibber, The Fangirl’s Guide to the Universe highlights the joys of fandom community and offers a fun, feminist take on the often male-dominated world of geekdom. This refreshed edition updates The Fangirl’s Guide to the Galaxy including new interviews.

Beware…this book is cursed! These strange but true stories of the world’s most infamous items will appeal to true believers as well as history buffs, horror fans, and anyone who loves a good spine-tingling tale.

They’re lurking in museums, graveyards, and private homes. Their often tragic and always bizarre stories have inspired countless horror movies, reality TV shows, novels, and campfire tales. They’re cursed objects, and all they need to unleash a wave of misfortune is . . . you.

Many of these unfortunate items have intersected with some of the most notable events and people in history, leaving death and destruction in their wake. But never before have the true stories of these eerie oddities been compiled into a fascinating and chilling volume. Inside, readers will learn about:

• Annabelle the Doll, a Raggedy Ann doll that featured in the horror franchise The Conjuring
• The Unlucky Mummy, which is rumored to have sunk the Titanic and kick-started World War I
• The Dybbuk box, which was sold on eBay and spawned the horror film The Possession
• The Conjured Chest, which has been blamed for fifteen deaths within a single family
• The Ring of Silvianus, a Roman artifact believed to have inspired J. R. R. Tolkien’s The Hobbit
• And many more! Complete your collection of the William Shakespeare’s Star Wars® series and experience the blockbuster finale to the Star Wars® saga in a brand-new way, here reimagined as though it had been penned by the Bard of Avon.

As our story opens, a sea of troubles threatens the valiant Resistance, who are pursued by the sound and fury of the vile First Order. Can Rey, Poe, Finn, Rose, BB-8, Chewbacca, and their allies overcome such toil and trouble? Shall Kylo Ren be proven fortune’s fool or master of his fate? What will become of the House of Skywalker? And is all well that ends well?

Authentic meter, stage directions, reimagined movie scenes and dialogue, and hidden Easter eggs will entertain and impress fans of Star Wars® and Shakespeare alike. Every scene and character from the film appears in the book, along with twenty woodcut-style illustrations that depict an Elizabethan version of the Star Wars® galaxy.

Mars has been a source of fascination and speculation ever since the Ancient Sumerians observed its blood-red hue and named it for their god of war and plague. But it wasn't until 1877, when "canals" were observed on the surface of the Red Planet, suggesting the presence of water, that scientists, novelists, filmmakers, and entrepreneurs became obsessed with the question of whether there's life on Mars. In The War of the Worlds, H.G. Wells suggested that we wouldn't need to make contact with Martians—they'd come for us—while, many years later, Nikola Tesla claimed that he did make contact.

Since then, Mars has fully invaded pop culture. It has its own day of the week (Tuesday, or martis in Latin), candy bar, and iconic Looney Tunes character. It has been the subject of novels and movies, from Ray Bradbury's The Martian Chronicles to Mars Attacks! to The Martian. And it has sparked a space-race feud between Elon Musk and Jeff Bezos, who both hope to send a manned mission to Mars in the near future.