A Spoonful of Time 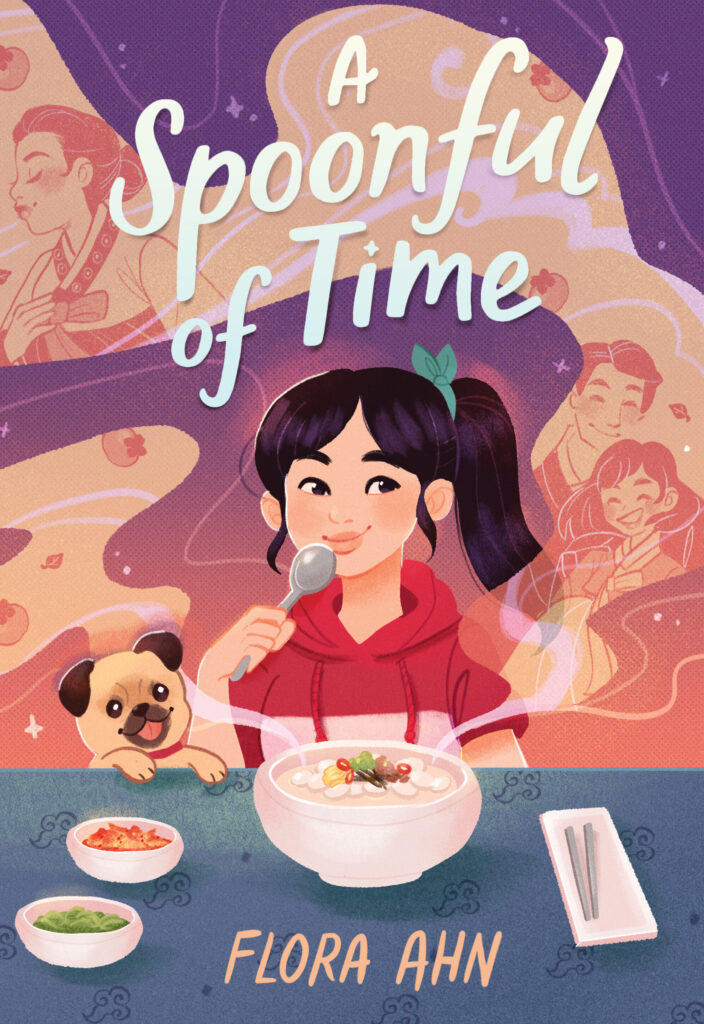 When You Reach Me meets Love Sugar Magic in this unforgettable middle grade novel where time travel, family recipes, and family secrets collide.

Maya’s grandmother, Halmunee, may be losing her memory, but there’s something almost magical about the way she cooks. Whether Halmunee serves salty miyeokguk or sweet songpyeon, her stories about Korea come to life for Maya.

Then one day, something extraordinary happens: a single delicious bite of patbingsu transports Maya and Halmunee back into one of Halmunee’s memories. Suddenly they’re in Seoul, and Halmunee is young.

This is just the first of many secrets Maya will uncover: that she and her grandmother can time-travel, and they aren’t the only ones with this ability. As Maya eats her way through the past, her questions multiply—until a shocking discovery transforms everything she thought she knew about family, friendship, loss, and time itself.

Brimming with heart and interspersed with seven family recipes that readers can make themselves, this is a story to savor by rising Korean American author Flora Ahn. Packed with shocking twists, frightening monsters, and dark magic, this is a page-turning fantasy adventure for middle-grade fans of Holly Black and Tamora Pierce.

Twelve-year-old Octavia grew up believing the town of Vittoria was the only one left in the world. The sole survivors of a deadly magical war and plague, the people of Vittoria know there’s no one alive outside the town walls—except the terrible monsters that prowl the forest.

But then the impossible happens: Octavia meets another girl beyond the walls, someone who claims to have traveled from far away. Everything she’s ever believed is thrown into question, and there’s no going back.

In her quest for the truth, Octavia discovers a world full of lies, monsters, and magic. She’ll have to use every scrap of her wits and courage to uncover what’s real about her family, her home, and the rest of the world. An army of toys, a menacing threat, and a thrilling adventure collide in the high-stakes sequel to Spark and the League of Ursus.

Spark may be a cute and cuddly teddy bear, but she’s also a fierce protector. Weeks after rescuing her human owner—a budding young filmmaker named Loretta—from a hideous monster, everything seems to be returning to normal. But then Spark is summoned before the mysterious Grand Sleuth, the high council of teddy bears, who task her with a dangerous mission: locating the portal to the monster’s world.

During her daring quest, Spark discovers a terrible secret that changes everything. In order to keep Loretta and their whole town safe, she must enlist the help of her loyal toy friends and team up with an unexpected ally. As the menace grows, Spark realizes that Loretta has a hidden power that may be the key to saving them all . . .

This dark middle grade fantasy is perfect for fans of the Nightmares! series and Holly Black’s Doll Bones. Comic Quests is a series of interactive, pick-your-panel graphic novels for middle grade readers, full of adventure, puzzles, and fun! Knights Club is a hilarious, medieval-themed quest for bravery and glory.

You’ve been training to be a valiant knight, and now the prince of Nekashu needs your help: the princess of the orcs has been taken by a band of vikings! Solve riddles, traverse mountains, and fight giants and dragons to reach the princess and bring her safely home. Your success depends on your choices alone, because the hero is you! “Grab a flashlight and burrow under the covers! Spark and the League of Ursus is the perfect bedtime adventure, with a fierce, fluffy hero you’ll want by your side when the lights go out.”—Kirsten Miller, New York Times bestselling co-author of Nightmares!

Toy Story meets Stranger Things in this epic tale of warrior teddy bears and the children they protect.

Spark is not your average teddy bear. She’s soft and cuddly, sure, but she’s also a fierce warrior. At night she fulfills her sacred duty: to protect the household from monsters. But Spark’s owner Loretta is growing up and thinks she doesn’t need her old teddy anymore.

When a monster unlike any other descends on the quiet home, everything changes. Children are going missing, and the monster wants Loretta next. Only Spark can stop it. She must call upon the ancient League of Ursus—a secret alliance of teddy bears who are pledged to protect their human friends. Together with an Amazon-princess doll and a timid sock monkey, the bears are all that stands between our world and the one that lies beneath. It will be a heroic chapter in the history of the League . . . if the bears live to tell the tale.

The adventure continues in Spark and the Grand Sleuth. Warren the 13th sets sail on his final adventure in this lushly illustrated middle grade series in the spirit of Edward Gorey and Lemony Snicket.

In this final story of Warren’s thrilling adventures, the young manager is adjusting to the demands of running a floating hotel and is planning his thirteenth birthday party. But then disaster strikes! The Warren Hotel is shipwrecked on a strange island, and Sketchy is kidnapped!

Warren and his crew of friends set off on a daring rescue mission across the high seas, where they meet a delightful new cast of characters that includes wizened pirates, a sea witch, and a talking clam. As Warren pursues his many-tentacled friend’s kidnappers, he will learn the truth of Sketchy’s mysterious origins—as well as one final secret of his beloved Warren Hotel.

Once again, readers can expect mesmerizing illustrations on every page, along with plenty of riddles, puzzles, and adventure galore!