For the final part of this series, I want to talk about all of the incredible graphic novels by women that are floating around in book and comic stores out there. These women are putting out beautiful, lengthy, amazing works of art and calling them graphic novels, and you can just buy them! With regular money! At a store! WHAT A TIME TO BE ALIVE!

I know what you’re thinking: why would I read the book versions of these comics when I can get them for free on the internet? Trust me, I thought that, too. But the reasons are:

A.) Books are awesome! You can hold them in your hands and cuddle them and sit them with you at the breakfast table and argue with them about finances and…

B.) The creators frequently put comics into the books that are not available online, so you can ONLY read them if you get the books. And…

C.) Supporting artists by purchasing their books and merchandise is great! It feels awesome! It feels like tummy rubs and cheesy popcorn! You should do it sometimes, is what I’m saying. 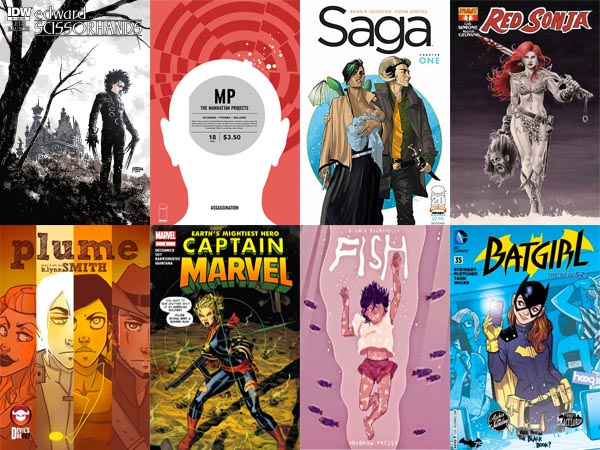 In my very important and learned opinion, it’s just as important to have women represented behind the scenes as it is to see them on the pages of the comics we love. After all, none of us will ever be a comic book character, but some of us may help to create them one day, in one form or another.

Keep in mind that MANY of the comics mentioned in Part I of this three-part lady-comics-fest have amazing female writers, artists, and colorists. This list is highlighting the ladies behind the scenes of comics that may not feature ladies IN the scenes (and some of them totally do. Lists can’t be eternal).

1. Edward Scissorhands (Kate Leth – Writer): The people behind Edward Scissorhands – including the awesome Kate Leth, founder of the Valkyries (a group for women who work in comic book stores) and mind behind the webcomic Kate Or Die! – have really been killing it with this new series. They’re only three issues in, but I’m already hooked on the art and the storyline – which takes place after the movie. It’s super ‘80s-goth-fabulous and really great.

2. Manhattan Projects (Jordie Bellaire – Colorist): If you like comics, you’ve probably heard the name Jordie Bellaire before. Not only did she win an Eisner this past year for her coloring work, she is working on just about every awesome series that’s running right now. I picked Manhattan Projects to represent her work because, despite the decided lack of ladies (unless you count Laika, the space dog, which I totally do because YEAH LAIKA), I love this comic. It’s funny and fascinating.

Ten Awesome Lady-Centric Comics You Should Be Reading Right Now As a person who grew up both loving comics and possessing lady-parts, I had a hard time seeing many representations of myself that didn’t involve the tiny costumes of Wonder Woman or the female-version-of-a-dude-ness of Lady Deadpool. And while Wanda Wilson is fabulous, I couldn’t really go around whipping katanas out of my backpack to slice up my bullies without facing, like, one or two consequences, so I still found myself sort of at a loss. Also, she wasn’t really her own person. Where were the regular ladies in comics? Where, moreover, were the people who weren’t necessarily white or straight or physically perfect in every way?

Fortunately for the young (and old) comics lovers of today, comics creators are coming out with some of the best representations of women that I’ve ever seen. The women in the comics on this list aren’t necessarily “super” (although some of them are), they’re just women relying on their natural awesomeness to get them through whatever insane situation they’ve encountered. It’s so great that all of these comics exist.